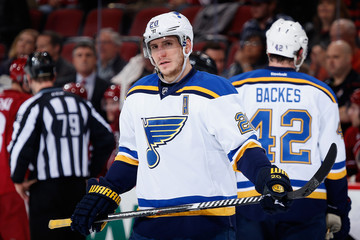 Over the past three seasons forward Alexander Steen has been one of the most consistent players for the Blues, both offensively and defensively. This year though, he seems to have disappeared along with most of the team. Through thirty-five games this year he has only found the net four times, and his assists are about where they normally are, the most frightening statistic is his Corsi rating, which comes in at an alarming -5.4. Could this just be a product of an older player trying to keep up with a changing game, or is he battling injury through this season?

Coming into the season at 32 years old, Steen is still very much in the prime of his career, but he certainly isn’t on the right side of 30. He has suffered some injuries the past couple seasons, missing a large part of last season with an upper-body injury, and a few games this season with concussion like symptoms. This still doesn’t explain why the production is down. It could just very well be that Steen doesn’t fit in with what the Blues are working for offensively.

This is not a shot at Steen, I love him and want him to remain in St. Louis for a long time, but he maybe needs to be moved down in the lineup. The Blues are working toward a faster paced, more skill orientated offensive game, T.J. Oshie would love what the team is doing now. General Manager, Doug Armstrong gave Steener a 4-year $23 million dollar deal, potentially locking him up for the rest of his career. Was this the best move for Armstrong to make though? Maybe some of that money could’ve been used to sign a guy like Patrik Berglund to a longer deal.

Steen is just one of the many Blues’ players underperforming this year, and it definitely raises a lot of questions about the Blues and their Stanley Cup aspirations.