Tomorrow officially kicks off the 2017-18 season (on ice). As always, the much anticipated prospect camp is expecting to draw a big crowd, as most Blues fans anticipate to watch some of the most popular prospects in the organization. The on ice Prospect Camp schedule begins with individual goaltender skill drills at 1:00PM. The first group of skaters will take the ice for skill drills at 2:00PM, followed by the 2nd group of skaters that will take the ice at 3:45PM. In the middle of the two sessions, there will be 3 on 3 and 4 on 4 scrimmages that will begin at 2:45PM. There will be five players from the 2017 draft class in attendance; F Robert Thomas, F Klim Kostin, F Alexei Toropchenko, D David Noel, and D Trent Bourque. The full prospect camp roster and teams include: 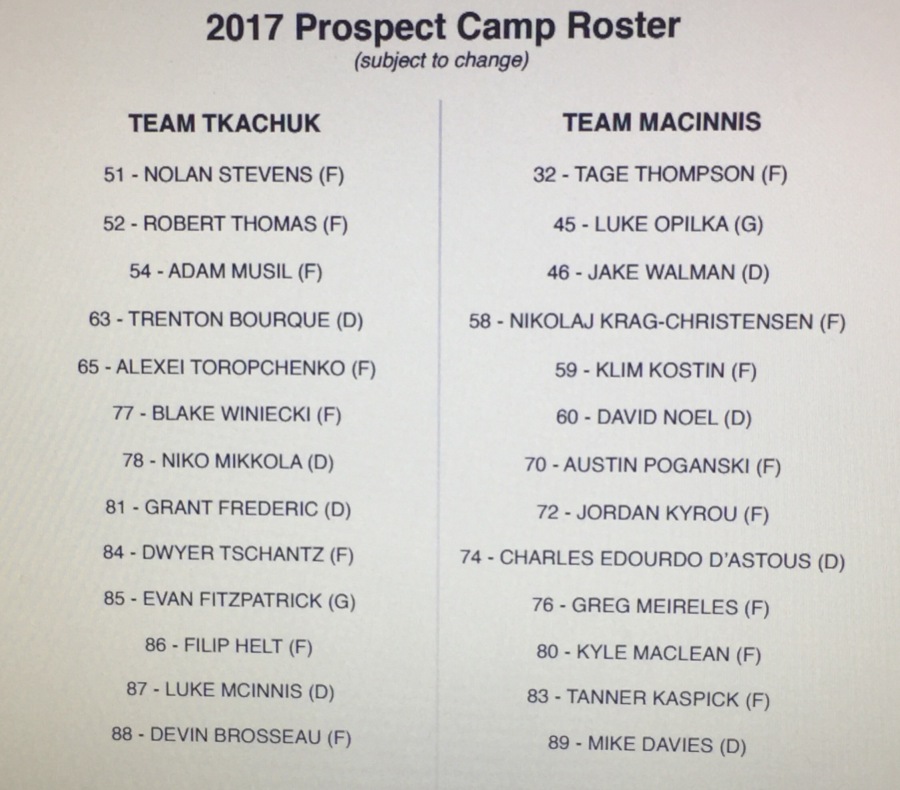 While this may not be the deepest, and most heavily populated prospect camp as years past, you have to take the quality over quantity this year. Last year’s 1st round pick, Tage Thompson becomes the vet of camp, it will be interesting to see if he stands out amongst the others – as he is expected to. Last year’s 2nd round pick, acquired in the Brian Elliott trade, Jordan Kyrou should excel in the 4 on 4, and especially the 3 on 3 scrimmage, as his speed should dominate. Flying under the radar, Prospect Camp vet, Austin Poganski will likely turn some heads – even though you should already know he’s supposed to – Poganski saw a good amount of time on the University of North Dakota’s first line last year. Another vet, Adam Musil is one of the “big 3” two-way forwards that will be given the chance to shine as he goes against the stacked Team MacInnis. Rounding out the “big 3” on team Tkachuk are Nolan Stevens and Robert Thomas, two players with very good defensive awareness. Most may not know Nolan Stevens, who is arguably the best two way prospect in the entire organization. The recently named captain of Northeastern University is one of my prospects to keep an eye on this week. Yet another Prospect Camp vet, Nikko Mikkola gets the honors, being the “top defenseman” on team Tkachuk. Mikkola, a 6’4, smooth skating, defensive defenseman has the job of containing Thompson, Kostin, Kyrou, Poganski, and Kaspick. As for Tanner Kaspick, along with Nolan Stevens, he is my  “prospect to watch”. Kaspick played alongside 2nd overall pick, Nolan Patrick for parts of the last 2 seasons. Kaspick can shine offensively, especially playing on Team MacInnis. I’m interested to see how 2017 draftees, D Trent Bourque and D David Noel look on the ice, going against multiple talented forwards. My guess is that one will standout, likely Trent Bourque, who is your prototypical, big defensive defenseman. Arguably saving the best, or atleast the most NHL ready for last, defenseman Jake Walman should, could, and will shine. This is an important prospect camp for Walman, if you remember, 2 years ago whenever Colton Parayko took the ice, he stood out and impressed so much that it was the start to his enormous run to making the team and having a fantastic rookie season. It’s a blessing in disguise for Walman that Vince Dunn has graduated from Prospect Camp. As for both goaltenders are concerned, both Opilka and Fitzpatrick had down years, statistically, last season. I’ve made the arguement that it wasn’t all on them, as their team’s defense wasn’t the best. We’ll find out if they can shake off the rocky 2016-17 season starting tomorrow at Prospect Camp.

Best forward: Klim Kostin. Yes, I really do believe we will see Kostin dominate at prospect camp, even considering he hasn’t been on the ice much for any team practices and such. Thompson will push him, but I believe Kostin will be the finisher and will flourish in the scrimmage.

Best defenseman: Jake Walman. I’m expecting a slick camp from Walman. His first pass, and stretch pass ability should shine in this atmosphere. We should see his offensive and defensive talent on full display.

Possible underdog: Alexei Toropchenko. Toropchenko is another big, Russian winger with a lot of offensive upside, like his former teammate, Klim Kostin. Toropchenko is on Team Tkachuk and has the opportunity to be the most impressive, offensively, on the team. While Thomas, Musil, and Stevens shine defensively, look for Toropchenko help carry the offensive load.

Under the radar player(s) to watch: Tanner Kaspick and Nolan Stevens. Both players were productive offensively last season for their respected teams. While they not be the most known this week, I’m predicting that you’ll for sure know these two names after Prospect Camp is over. Kaspick can have himself a hay day playing alongside Kostin, Thompson, Kyrou, and Poganski. Meanwhile, Stevens has the potential to shut them down defensively, and attack them in their own zone.

Thanks for reading. Tweet me your  comments, thoughts, opinions, and predictions on this year’s Prospect Camp @Palazzola_RTN.