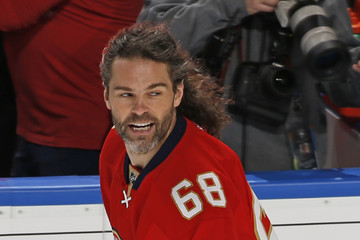 The free-agency frenzy dust has settled with many of the big names off the board. Over GM Doug Armstrong’s time with the Blues he has rolled the dice on veteran forwards, giving some players a chance to continue their playing career on a cheap contract. There have been some success stories, such as Jason Arnott (34 points), Jamie Langenbrunner (24 points) in 2011-2012 season and Brenden Morrow (25 points) in 2013-2014. There have also been some not-so-successful attempts like Scottie Nichol (1 point in 30 games) in 2012-2013 and Scott Gomez (8 points in 21 games) in 2015-2016.

Some quality middle six forwards signed inexpensive deals to have another shot at the Cup. Jussi Jokinen (signed for $1.1M), Ales Hemsky ($1M), Patrick Sharp ($800K), and Scott Hartnell ($1M) just to name a few. There are still some quality veteran wingers available that could be signed relatively cheap.

However, this does not appear to be the route for Jaromir Jagr. If that was the case, Jagr would have already signed with a playoff caliber team for $1-1.5M. For that salary range, there would be 31 takers. The ageless winger showed last season that he can still play at a high level. He played in all 82 games, putting up 46 points in almost 17 minutes per game. The 46 points would have tied him with Perron for 5th on the Blues. Jagr also had a 55.4% CF%, and when he was on the ice the Panthers generated more shots from the slot than without him on the ice.

We know Jagr can still play. However, Jagr played for $4M last season, and he is probably looking for something similar this next season. He could get the money in the KHL. And as much as everyone (including me) would love to see him in a Blues Sweater, the money is not going to come from the Blues. The Note cannot afford a deal like that now. Per Capfriendly.com, the Blues have $7.6M in cap space with a roster size of 22 plus Colton Parayko still to sign. So, unless Jagr decides that he just wants another cup run, he will unfortunately only suit up at Scottrade (or Ameritrade) Center from the visitor’s locker room.