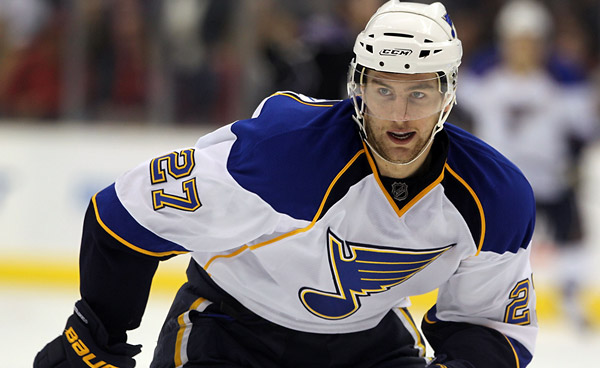 Tonight, the Blues defeated the defending Stanley Cup champions, the Pittsburgh Penguins, by a score of 5-4. It took overtime to decide the game, and it was the Blues captain, Alex Pietrangelo, who played the hero.

Now there is no real reason to miss the opening game of the season, but just in case you did, let me break things down for you in tonight’s game one recap!

The Penguins got on the board first tonight, as Justin Schultz found the back of the net, beating a screened Jake Allen. Schultz was the beneficiary of the hard work provided by Penguins captain, and reigning Conn Smythe winner, Sidney Crosby. Crosby out-worked two Blues in the corner to come away with the puck, found Schultz at the point, who beat Allen, who was screened by both Jake Guentzel and Joel Edmundson.

It didn’t take long for the Blues to answer back though, as Brayden Schenn scored his first goal as a member of the St. Louis Blues less than two minutes later. This was the result of a very nice passing play between Jaden Schwartz, Carl Gunnarsson, and of course, Schenn. Schenn picked up a loose puck behind the net, thanks to the fore check provided by Dmitrij Jaskin. Schenn found Schwartz in the slot, who fed the puck to Gunnarsson. Gunnarsson had jumped up into the slot, to fill the open ice left vacant by Schenn, he quickly dished the puck off to Schenn, who redirected it into the net off his skate. After a short review, it was deemed a good goal.

The Blues second goal of the night came on the powerplay, courtesy of Colton Parayko. Parayko is expected to have a much bigger role this season as the Blues enter their first year without Kevin Shattenkirk.

Parayko, who put the Blues on the powerplay after being tripped by Olli Maata, picked up a loose puck in the slot and rifled a wrist shot past Matt Murray.

The play was made available thanks to the terrific board play by Vladimir Sobotka, Oskar Sundqvist, and Tage Thompson.

At first glance, it appeared that Thompson fed the puck to the slot to a wide open Parayko. Unfortunately for the rookie, his first NHL will have to wait, as it was Penguins defensemen, Matt Hunwick, who cleared the puck into the slot. Regardless, it’s 2-1 Blues.

The second period continued the back-and-forth action between these two teams, and it was the Penguins who struck next. With 7:23 to go in the second period, the puck was deep in the Blues end, and new-comer, Chris Thorburn had the chance to clear it. He didn’t. The puck ended up on the stick of Olli Maata, and Maata tee’d up a slapper from the point that beat Allen high blocker side. Bryan Rust and Evgeni Malkin picked up assists on the goal.

Skating four-on-four late in the second, thanks to a slashing penalty by Guenztel and a too-many-men penalty being served by Thompson, the Blues got the lead back.

The play was started by Alex Pietrangelo in the defensive zone as he fed a pass to Paul Stastny in the neutral zone. Stastny entered the Penguins end the ice and dished the puck to Sobotka. Sobotka quickly passed the puck to Pietrangelo who jumped up into the play. Pietrangelo cut to the slot, and fired the puck past Murray for his first of the night.

The Penguins were incredulous on the bench, after the Pietrangelo goal as they wanted a call on Sobotka. After Sobotka got the puck to the Pietrangelo, he set a subtle pick on Penguins defensemen Brian Dumoulin in the slot. This allowed Pietrangelo to get to the middle of the ice and fire the puck past the glove hand of the Penguins netminder.

Early in the third, the Blues took a two goal lead thanks to Paul Stastny. It was Vladimir Tarasenko who carried the puck into the offensive zone. He passed across the slot to Sobotka. Sobotka then skated around a sprawling Bryan Rust, found Stastny in the slot, and he beat Murray to put the Blues up 4-2.

It was around the twelve minute mark in the third when things started to get a little worrisome for the Blues. Greg McKegg drew a tripping penalty on defensemen Robert Bortuzzo to put the Penguins on the power play. Then it was a complete bone-headed move by Schenn, who closed his hand on the puck and literally threw it out of the zone, which gave the Penguins a two-man advantage. Fun fact, giving the Penguins a 5-on-3 is just flat out a bad idea.

After some excellent puck movement by the Pens, it was Malkin who fired the puck on net. The puck rebounded off of Allen, deflected off the leg of Guentzel and was put into the back of the net by Crosby. Sid the Kid’s first of the year made it a 4-3 game.

Then it was just seconds after the penalty to Schenn expired, when Connor Sheary put a one-timer past Allen to tie the game. It was the Penguins second power play unit on the ice for the goal. Rust had the puck in the slot and found McKegg on the side of the goal. McKegg fed a pass through the slot to Sheary, who put the puck off of Gunnarsson’s stick and into the net. Off to overtime we go.

It only took a minute and fifteen seconds for the Blues to end things in overtime. Pietrangelo, carried the puck into the offensive zone, cut toward the middle of the ice, used Penguins defensemen Schultz as a screen to beat Murray and give the Blues the overtime win.

Now, let’s talk about a key points from tonight’s game.

First off, the Blues defense were noticeably more active into the rush tonight than we have seen the last few years. Gunnarsson jumped into the play on the first goal. Edmundson was crashing the net off the rush for the Stastny goal. Pietrangelo and Parayko were both jumping into the play, as was rookie defensemen Vince Dunn. The only guy I didn’t notice joining the play was Bortuzzo.

The kids are alright. Dunn didn’t make any glaring mistakes, was steady and joined the rush when opportunity presented itself. Other than that, he was pretty steady on the defensive side of things.

Oskar Sundqvist performed better tonight than he did in pre-season action. He helped push the play and was pretty good on the penalty kill. The penalty kill as a whole held the Penguins shotless on their first three power plays.

Tage Thompson moved the puck well, didn’t get any shots on goal, but all-in-all, not bad for a guy who basically stole Samuel Blais’ spot in the opening line up.

Jake Allen looked a little shaky at times, but you can’t really blame things on him. He was completely screened on the first two goals, had no real chance at the third goal, and my only complaint on the fourth goal was that he didn’t get over quickly enough. He’ll settle in just fine moving forward.

Lastly, let’s talk about that Brayden Schenn penalty. It was an absolutely bone-headed play, that I guarantee we will not see again out of him this year. Closing your hand on the puck is a penalty you rarely see, and this was one of those moment when he probably just panicked a little and wanted to clear the zone. Dumb way to do it, it cost the Blues, but that’s not going to be something you see as we progress through the season, and it’s doubtful if we see that happen again this year.

Now that we got our first taste of regular season hockey, we have to wait three days until the Blues open their year at home against Ken Hitchcock and the Dallas Stars. 81 more games to go folks, buckle up!