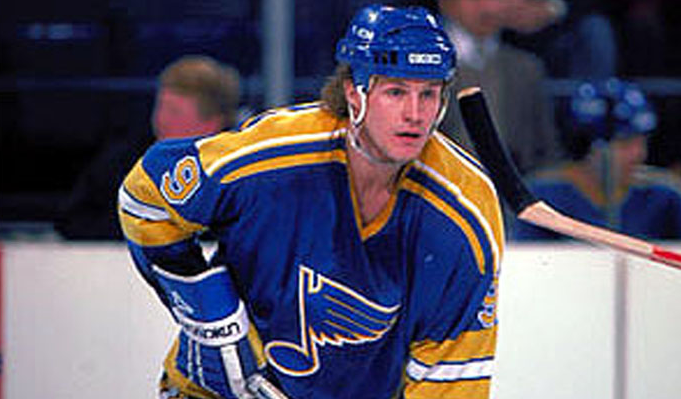 It takes a miserable season for an NHL team to end up with one of the top two picks in the NHL Entry Draft that they didn’t trade the farm for.

The St. Louis Blues of the 1970s were a never-ending conga line of disappointment. After Scotty Bowman left St. Louis for Montreal because he got into a snit with Sid Solomon III, the Blues began a rapid and hard descent.

After their final Stanley Cup appearance in 1969-70, the Blues won just one playoff round (1971-72 over the Minnesota North Stars in seven games) in the 70s, won eight playoff games in total, and missed the playoffs three times.

At the end of this run of misery came the 1978-79 season, where the Blues finished with franchise lows in wins (18) and points (48), along with franchise highs in losses (50) and goals allowed (348…which would be passed three seasons later).

The one bright point after a run like this is that the Blues ended up with the 2nd overall pick in the 1979 NHL Entry Draft. In a draft that saw future Hall of Famers Mike Gartner, Ray Bourque, Michel Goulet, Glenn Anderson, and Mark Messier picked, the Blues instead turned to a youngster from Bentley, Alberta, Canada named Perry Turnbull.

Three excellent seasons at the Portland Winter Hawks of the WHL were enough for the Blues to pull the trigger on the youngster. What the Blues actually got, however, was merely a good, but not great, forward.

He had three 30-goal seasons in that span, but he also had a mean streak and spent a lot of time in the penalty box in an era known for rough and tumble play.

During his fifth season in the Bluenote, the Blues decided that it was time to move on from their former 2nd overall pick and he was dealt to Montreal.

And thus begins our journey from how one draft disappointment became a Hall of Fame legend and Blues icon in just seven easy steps.

He also had a rather famous goal for the Blues.

His time in St. Louis ended rather acrimoniously, as he was selected first by Hartford, then Vancouver in the 1987 waiver draft.

Delorme was Montreal’s 1st round pick (18th overall) in the 1981 NHL Entry Draft and was drafted for his offensive prowess on the blue line, but it didn’t quite click and he quickly became a journeyman.

Paslowski wasn’t actually drafted, but may have ended up having the best career out of anyone the Blues got back for Turnbull.

Bell was a 3rd round pick in 1983 and didn’t last long in the NHL. Two of his three full seasons in the NHL were spent in St. Louis.

After the 1986-87 season, he was traded to the New York Rangers in what ended up being kind of a heist for the Blues.

3. Bell and future considerations dealt to the Rangers for LW Tony McKegney and D Rob Whistle – May 28, 1987

McKegney was a journeyman by this point and was a few years removed from goal-scoring seasons of 23, 37, 23, and 36 in Buffalo. He must have found something nice in the waters of St. Louis because he hit the ground sprinting in the Gateway City.

I bet you forgot about McKegney’s 40-goal season, didn’t you? Oh, you didn’t even know? Well, that’s understandable, given his falloff next year and exile to Detroit (hold that thought).

Whistle did nothing of note and was dealt a year later to Washington for a nothing pick. We couldn’t find anything on those “future considerations,” though. Maybe that was letting the Rangers brass pick a nice steakhouse instead of going to that damn pizza place the Blues brass always goes to when they’re in New York. You know the one.

One icon dealt for another (albeit short-lived) icon. Federko at this point in the late 80s was just about done and only had one more season in Detroit. Still, let’s admire what he did in the Bluenote, shall we?

In return, the Blues would get one-half of the famous Hull & Oates combination that ended all-too soon. Oates was regarded as a decent-to-good center at this stage of his career, but he’d explode in St. Louis.

As for MacLean, he was at the end of his rope like Federko was and lasted just slightly longer than Bernie.

Brett Hull was famously angry over this deal and rightfully so. As great as Hull was, Oates made him better. However, Blues GM Ron Caron traded Oates away for what essentially was a poor man’s Adam Oates and a promising defenseman.

As good as Oates was, it felt that Janney was just as disappointing. Take the Oates equation out of it, though, and Janney was still productive.

What happens after Janney is dealt to San Jose might be worthy of a “X Degrees” article of itself.

The Blues acquired D Jeff Norton for Janney during the 1994-95 season. Norton was then traded with Donald Dufresne to Edmonton for D Igor Kravchuk and D Ken Sutton. Kravchuk was dealt to Ottawa after 1.5 seasons for D Steve Duchesne’s 2nd tour of duty in STL. He would then leave as a free agent after the 1997-98 season for Los Angeles.

As for Sutton, he’d get dealt with a 2nd rounder to New Jersey for goon Mike Peluso and D Ricard Persson. Peluso actually would end up back with the Rangers as compensation for the Blues signing Larry Pleau to be GM. Persson spent a few solid, unspectacular seasons with the Blues before signing with Ottawa after the 1999-00 season.

As for Quintal, he’d have to live up to his potential elsewhere.

At this point of his career, Housley had a heck of a reputation as being an offense-first defenseman. In the season before he arrived in St. Louis, Housley nearly had 100 points, tallying 18 goals and 79 assists for 97 points in a huge year. At 29 years old, the Blues expected a top offensive pivot for years to come. Instead…well…

Injuries cut him down to just 26 games in the Bluenote and also cut into his production when he was on the ice. After the season, the Blues decided to trade Housley in for a more reliable model.

Oh, and this Al MacInnis guy, too. But that doesn’t rhyme with my version of Martina McBride’s great song.

In yet another example of the Blues taking the Calgary Flames to the woodshed in a trade in this era, the Blues acquire Inverness, Nova Scotia’s favorite son. The ages of Housley (30) and MacInnis (31) are comparable, but Housley, as good as his offensive reputation was, had the reputation of playing defense like a swinging saloon door. But, in addition to being more of a complete defender, MacInnis was also more of a goal-scorer, registering three 28-goal seasons in five prior seasons in Calgary.

Housley lasted barely half of a season in Calgary before getting punted to New Jersey for a less-thrilling package than what they sent to St. Louis. Begin and Tripp were journeymen who didn’t do a lot of note at the NHL level.

MacInnis only became a St. Louis legend, forming what most considered the best defensive duo in the NHL with Chris Pronger in the late 90s and early 00s.

It took 15 years, seven trades, and a lot of other players/picks being involved to get from Perry Turnbull’s selection in 1979 to the Blues’ 1994 trade for Al MacInnis. It’s also worth noting that MacInnis was drafted two seasons after Turnbull (15th overall in 1981).

Still, it’s fun to draw a line connecting a semi-bust to a NHL legend through the power of trade, and this is probably just one example of many such lines you can draw, as Caron was a high-volume trader in this period.

It’s also proof that sometimes a failure can lead to a future success. Case in point: D Erik Johnson. The former 1st overall pick was considered something of a disappointment in St. Louis before he was dealt with C Jay McClement to Colorado for promising power forward Chris Stewart and this intriguing defenseman named Kevin Shattenkirk.

Proof that, in the NHL, you can make some nice lemonade out of your lemons.