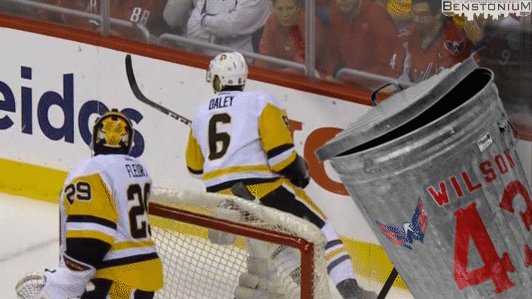 When I say this, I don’t mean he throws the body often, gets into an abnormal amount of fights, or commits too many penalties (although all three are true). No. I mean that Tom Wilson is a danger to the entire league.

Don’t get me wrong. I long for the days of aggressive hockey, and real bareknuckle brawls like that 80’s was known for. What I don’t like is players whose main goal on the ice is to cause as much physical harm to opposing players. Tom Wilson is not a hockey player. He’s not even a goon. He’s an unprofessional excuse for an enforcer whose soul purpose is headhunting.

This would be enough to reasonably suspend a player in my mind, but this is just the beginning. You see, Tom Wilson has a long history of game misconduct violations for boarding, hits to the head, etc., stemming all the way back to his rookie season in 2013 when he damn near assaulted Brayden Schenn of all people. Wilson avoided suspension this time, likely because it was a first offense.

Fast forward five years and Wilson will be facing the DoPS (Department of Player Safety) for the 11th time. As of tomorrow he’ll face his 4th misconduct violation in a year, with one against the Blues last preseason, and two in the 2017 Stanley Cup playoffs.

So why does this all matter? What’s my point?

Current strategies don’t work for penalizing this guy. He’s a loose cannon. He doesn’t care how much money he is fined, and a 2-5 game suspension isn’t the end of the world when the player is a glorified fourth liner. Suspensions should be longer. Players like this don’t deserve to be playing hockey.

It’s certainly not a perfect system, nor will it ever be, but I propose that for first time offenders of “headhunting”, “targeting”, etc should be immediately issued a 2-5 game suspension based on severity and intent. I don’t want big hits getting taken away, but I do want deliberate cheap shots to go extinct.

Repeat offenders of this policy should be given a strict 10+ game suspension, with the caveat that if the targeted player is injured, the violator is suspended until that player returns to the ice. It’s strict. It’s game changing for sure. But it’s one of the few ways to get the message across. Nobody wins when you play like a jackass.

Wishing the best, and a speedy recovery for Oskar. Excited for the start of hockey season. Be on the lookout for a weekly recap each weekend through the season right here on RTN from yours truly, and follow me on twitter @BStock72

Tom Wilson has received a 20 game suspension. This will cost him $1.26 million. This is a solid step in the right direction for the NHL in my opinion.