As another year of hockey has already reached its mid-point, the St. Louis Blues have, once again, found themselves in the middle of a predicament involving their two rostered net-minders.

Now, if you follow me on twitter, you can probably assume what alignment I side with in regards to who I think the Blues should be starting next game, but that’s not to say I don’t support Jake Allen when he’s in net or recognize what he’s done or been through with this club.

Comparing just those statistics alone, it should be easy to take the blame off a goaltenders shoulders for the sole reason why a team is losing, seemingly, game after game. If your goalie is showing out with a .920 SV% and the teams not showing up with goal support, it doesn’t matter if he’s “batting” 1.000, you’ll just lose in the shootout. It takes a balance and the team wasn’t doing their part.

At the end of January 2016, the season Jake Allen single handedly defeated the Minnesota Wild in the 1st round, Jake posted a .897 SV%  with 2.85 GAA ( his numbers, as of January 9th, 2019, currently sit at .896/3.07). This is not an unfathomable, deteriorated version of #34 that we’re seeing right now. He’s the same goaltender he’s always been, but either the team in front isn’t doing their job or the defensive scheme is too complex. But, to blame Allen entirely for this teams, albeit depressing, regression is simply unfair.

I don’t think Jake Allen is anything more than an average-slightly above average goaltender in this league and, if he played like that on a consistent basis, he’d be more than adequate moving forward as our starting goalie. He just has too many peaks in play where he’s outstanding and valleys where pucks seemingly pass through him that you never really know which one of the three versions of Jake you’re going to get night in and night out. That being said, for this team to succeed under him, they either need to either play lockdown defense and a full 60 minutes, or they have to bank on the incredible Allen to show up to bail them out which, 1 out of 3, leaves them at a 33% chance of that happening.

Mentally, being the scapegoat for fans year after year, has most likely taken a toll on him and a change of scenery would be mutually beneficial for both parties involved, however difficult that might be to finagle.

Jordan Binnington is not an attractive, Corey Pronman’s Top 100 prospect. He’s an experienced 25 year old goalie who has developed his game and been a pillar of consistency for the multiple teams he’s played for.

He was promoted to start with the Blues AHL affiliates in 2014 and, since that time, has not had a seasonal SV% sub .907, with his numbers consistently near .920. 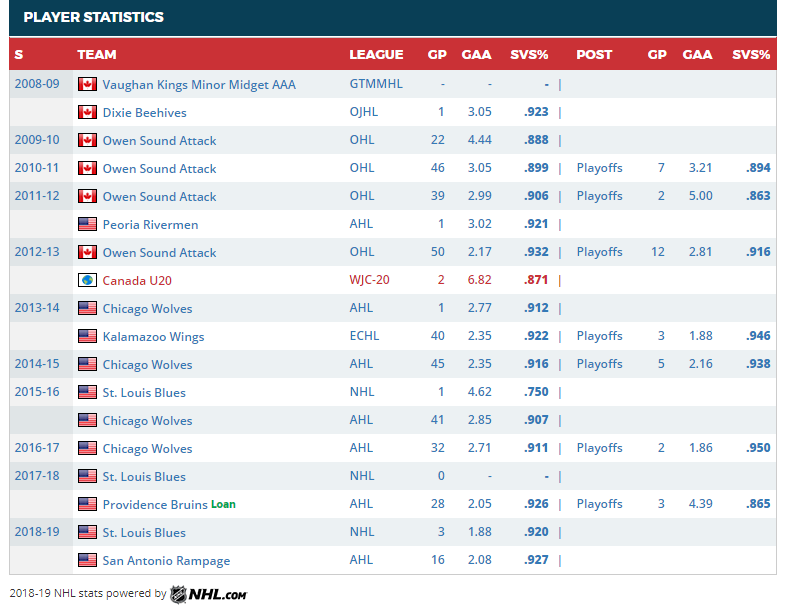 After finding out he was 1 of 2 goaltenders to record a shutout in their NHL debut in Blues franchise history, Binnington told Fox Sports Midwest reporter Darren Pang it was, “cool”.

What’s really “cool” is the ice in his veins, the calm and collected way he plays the puck, and that a player who has worked at his craft through four different leagues and eight different teams over a ten year span could finally get a chance to make himself a household name.

One thought on “Is Jordan Binnington a Question Mark or The Answer?”